BUSINESS REPRESENTATIVES OF TURKEY AND DJIBOUTI GATHERED IN ANKARA BY DEİK

Minister of Economy and Finance in-charge of Industry and Planning of Republic of Djibouti İlyas Moussa Dawaleh read the speech of President Djibouti Ismail Omar Guelleh, who was unable to attend due to the weather conditions: "You organized such a nice meeting. I am very happy that this meeting has been held. This meeting is also a part of the business opportunities we want to develop with the Republic of Djibouti.We want to grow and develop together.  Both our business world and our governments have had many contacts. Different economic actors have the opportunity to come together in Turkey and Djibouti. Our trading volume does not include figures from free zones. Of course we can overcome trade volume and do better. We want to build a more forward-looking, sustainable, productive and promising relationship within the two countries. It is our ultimate motivation to work together, to do more. We aim to win-win partnership. Business opportunities offer a natural possibility for you. We offer modern infrastructure and a reliable legal framework. It creates a solid environment for the ground we want to reach in the future. We need to improve our business environment even further and we must create an environment in which we can struggle with international competitiveness and the challenges we face. In Djibouti, there are investments that attract the attention of different private sectors. There are legal frameworks like the Reciprocal Promotion and Protection of InvestmentsAgreementor the Double Taxation Prevention Agreements we plan to sign with Turkey.There is a Special Economic Zone established for Turkish investors. It is possible to reach different countries where both countries are parties through preferred agreements."

Deputy Finance Minister of Republic of Turkey Dr. Cengiz Yavilioğlu stated that Djibouti, which constitutes the importance of Turkey's strategic vision and opening up for Africa, is a country that offers many opportunities for investors. Yavilioğlu indicated that Djibouti's trade volume with Turkey in the first ten months of 2017 increased compared with 2016. But this increase does not reflect the potential of the two countries when they are considered to be at the centre of international trade routes. Yavilioğlu who underlined a balanced increase in trade volume between the two countries will continue to be one of the priorities of the bilateral economic agenda, said that infrastructure investments, contracting services, energy, agriculture, livestock and health sectors have become the foreground as potential areas of cooperation between the two countries. Yavilioğlu who stated that they are thankful for Special Economic Zone which has allocated to Turkey, continued his words as follows: "We are continuing our efforts for the Special Economic Zone to be operational as soon as possible.The additional steps to be taken by the Djibouti authorities to promote Turkish investments will be welcomed. We think that the investments will have a significant contribution to the welfare level of Djibouti. As our Ministry, we also attach importance to our relations with Djibouti because our Minister of Finance Mr. Naci Ağbal is the Co-Chairperson of Turkey-Djibouti Joint Economic Commission."

DEİK President Nail Olpak said that Djibouti has a 400-year common history with Turkey. Olpak who indicated that Africa's potential is indisputable, said that this potential does not mean that Africa has only an aspect of natural resources and the unilateral acquisition of these resources. Olpak stated that "When we look at Djibouti from an economic point of view, we can see that it is possible to target a 150 million market with Ethiopia, South Sudan and Somalia, which are the closest to this country, which is in a strategic position. As for today, we see that bilateral trade volume reached 84 million US Dollar in the first 10 months of 2017. We will strive to raise this volume to 150 million US Dollars in the first term and 300-500 million US Dollars in medium and long term.

DEİK President who indicated that we are ready to take any steps to accelerate partnerships and collaborations in areas where the Turkish business environment has an intensive experience such as; energy production from geothermal resources, contracting projects for the elimination of public housing, hospital operation, airport construction projects, etc., continued his word as follows: "Of course, I would like to remind that even in limited areas, our agricultural and tourism potentials and what can be done especially in the field of health tourism. Turkey's average level of economic growth was 5.7 percent in the last 15 years. But it in the third quarter of this year the record renewed by 11.1 percent. We want Djibouti to grow up with us."

Following the opening speeches, the meeting continued with introductions of business representatives. 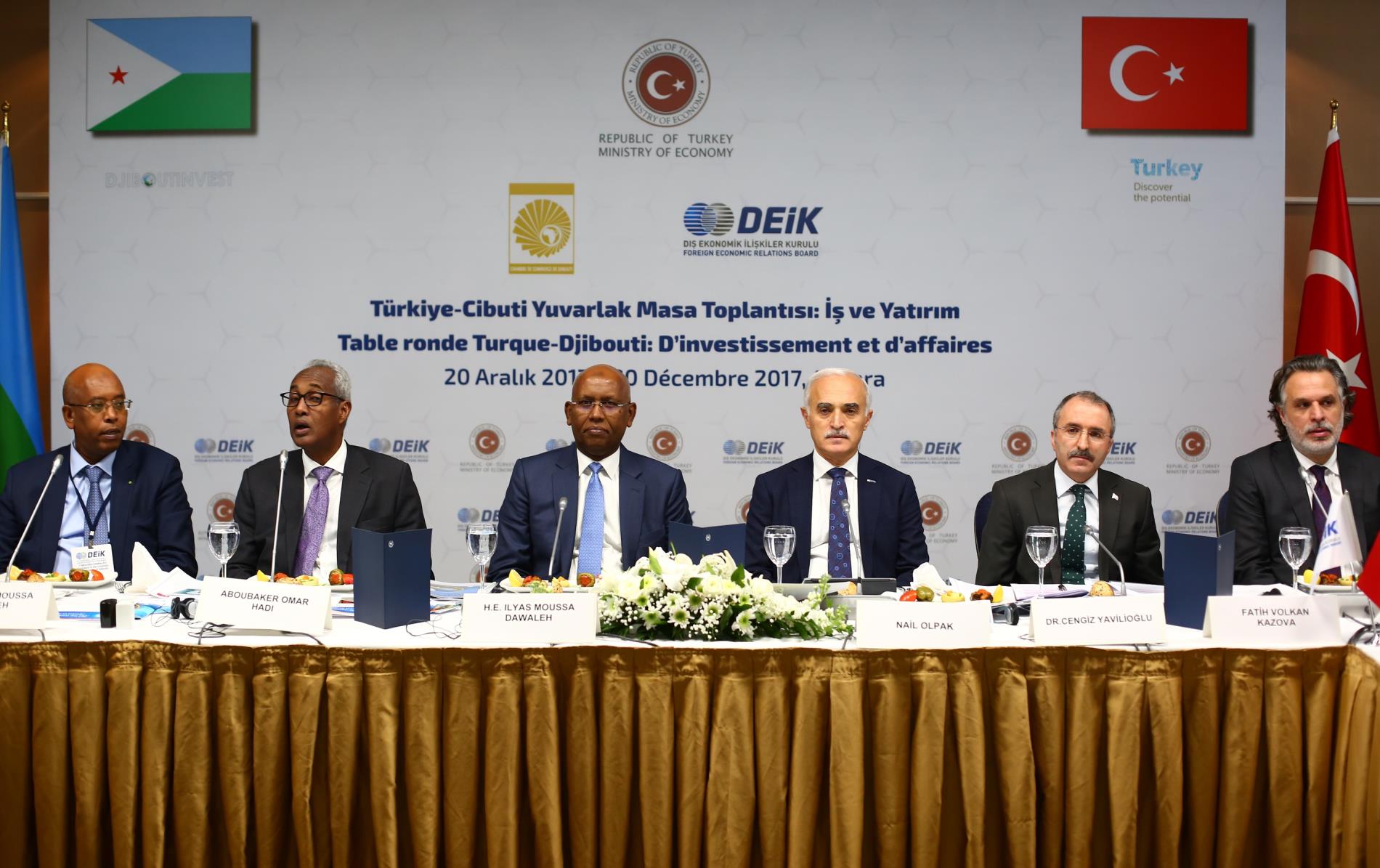