Vice-President of Republic of Uzbekistan Cemşid Kuçkarov remarked that President of Republic of Turkey Erdoğan and President of Uzbekistan Mirziyayev have convened on highly constructive and cooperation basis. Kuçkarov, stating that the increase in Turkey's trade volume is also favourable for Uzbekistan, further noted, "I believe we have a great deal of things to learn from Turkish people about entrepreneurship." Kuçkarov, emphasizing that the entire limitations and restrictions within the foreign exchange market were lifted as of September, further stated, "We are currently accomplishing substantial macroeconomic transformation. We are also receiving assistance from IMF, World Bank and other international organizations. We will also be receiving our Turkish friends' support during the process of realization of the reforms." Kuçkarov, pointing out that the favourable developments with respect to visa application shall be continued, further noted, "We are proceeding with our endeavours aiming to attract investments from Uzbekistan to Turkey. Furthermore, we congratulate the cooperation of Ziraat Bank having its entirely owned bank with a capital of 100 percent. Direct flights from Istanbul to Samarkand shall be put into operation with Turkish Airlines in the summer season. We anticipate around half a million tourists arriving from Turkey annually. Machinery manufacturing industry shall be another area of cooperation. We further anticipate a potential cooperation in light industry, manufacturing of electrical household appliances. PPP system is another aspect that we have many relevant things to learn from Turkey, and I believe that Turkish enterprises shall make substantial contributions to BOT and PPP projects."

Vice-President of Republic of Uzbekistan Kuçkarov, stating that the constructions of high-speed train, highway and three airports in Uzbekistan shall be accomplished through PPP system within the planning, further said, "We will be providing state support to the first investors for the utilization of Uzbekistan state resources. We are identifying new prioritized areas and sectors in Uzbekistan. We are trying to find new development areas. Thus, we would like to leap forward. Accordingly, we intend to sustain our endeavours on a continuous and regular basis."

Republic of Turkey Minister of Economy Nihat Zeybekci stated that Turkey, standing out with its high growth rate and increasing exportation for the years 2016 and 2017, is ready to provide the required support and assistance for the restructuring of Uzbekistan. Zeybekci, remarking that 21 agreements were concluded within the scope of official meeting of President of Uzbekistan Mirziyayev and President of Republic of Turkey Erdoğan in Ankara, further noted, "Our exports, which was 142.3 billion USD in the previous year, were accomplished as over 158 billion USD this year. We increased Eximbank's capital to 10 billion USD. More than 25% of our exports now can be financed by that. Our target for the year 2018 is to increase this ratio to 30% and leave South Korea behind. Now we are setting Eximbank in motion for Uzbekistan". Zeybekci, pointing out the potential of Uzbekistan, said, "Uzbekistan, with its population of 35 million, is among the promising countries of the region. Avoidance of Double Taxation Treaty was signed yesterday. We are not proceeding into a relief period with respect to the visas on Uzbekistan's side. Direct flights shall be initiated by Turkish Airlines as of March.

No such country in the world exists that invests in for doubling its power generation within 10 years. There is no such other country that promises such opportunities within 10 years in healthcare technologies, bridge and highway construction, education and industry. Uzbekistan also has exactly the same conditions. Opportunity of Uzbekistan should be regarded accordingly."

Turkish Contractors Association (TMB) Chairman and DEİK Vice-President Mithat Yenigün stated that he is confident that the developments between both countries would be further improved particularly within the frame of trade and investments. Yenigün said, "We seek to develop the bilateral trade between our countries; expedite the investment and place the Turkish-Uzbek cooperation as a trademark within the entire Eurasia Region starting from Uzbekistan by means of exploring our strengths within various sectors." Yenigün, remarking that Turkish contractors stand out with their business administrator identities, further noted that those experiences could be shared in Uzbekistan as well.

Yenigün, stating that the political, economic, trade and cultural relations having their roots going back into the history between Turkey and Uzbekistan render the business circles of both countries coming closer and familiarize the business culture in Uzbekistan, further pointed out, "The project costs assumed in Uzbekistan up until today are way below than the real potential between the two brother countries. Projects worth 2,8 billion USD have been accomplished in Uzbekistan since 1992, when we first stepped into the market up until today and almost one-third of this amount was undertaken last year. I would like emphasizing that we are ready for the cooperation to improve our activities within the Republic of Uzbekistan and to contribute to the wellbeing and prosperity of your beautiful and fine country. Turkish contracting enterprises are available and open for distinctive and various cooperation models such as joint ventures and consortiums."

DEİK/Turkey-Uzbekistan Business Council President M. Hayri Kartopu stated that Turkey-Uzbekistan Business Forum was held for the 3rd time within the year 2017. Kartopu, noting that the visits performed between Turkey and Uzbekistan are considered and assessed as historical steps taken for the purpose of enhancing, strengthening and rationalizing the trade, economical, political and socio-cultural cooperation between the brother countries, further stated, "Uzbekistan, with its population of more than 30 million, is among the key countries of the Eurasia Region with its deep-rooted history, strategic location, ancient and prosperous civilization, extensive domestic market and investment potential. As Turkey, we attach substantial importance for the development and improvement of cooperation with Uzbekistan in every possible area." Kartopu, stating that the bilateral trade volume between Turkey and Uzbekistan has overcome its regression tendency and continues to maintain a certain level, further said, "It is stated that more than 600 enterprises with Turkish capital operate in Uzbekistan within the sectors of textile, food industry, hospitality management, retail business, manufacturing of construction materials and service." Kartopu also noted that he wishes for the removal of the visas applied to Turkish citizens upon performing a revision of the visa regime. Kartopu further stated that the bilateral trade with Uzbekistan steadily maintains its position of 1.2 billion USD for the last 6 years.

Upon the opening speech of the Business Forum, DEİK Vice-President Mithat Yenigün and Republic of Uzbekistan State Committee on Investments President Azim Ahmedhacaev have signed an Agreement of Cooperation on Investment Areas and Credit Extension Cooperation Agreement was signed between Turkish Eximbank and the National Bank of Uzbekistan. Furthermore, 4 more cooperation agreements were signed in the Forum for the purpose of developing healthcare, textile, hospitality management and trade. 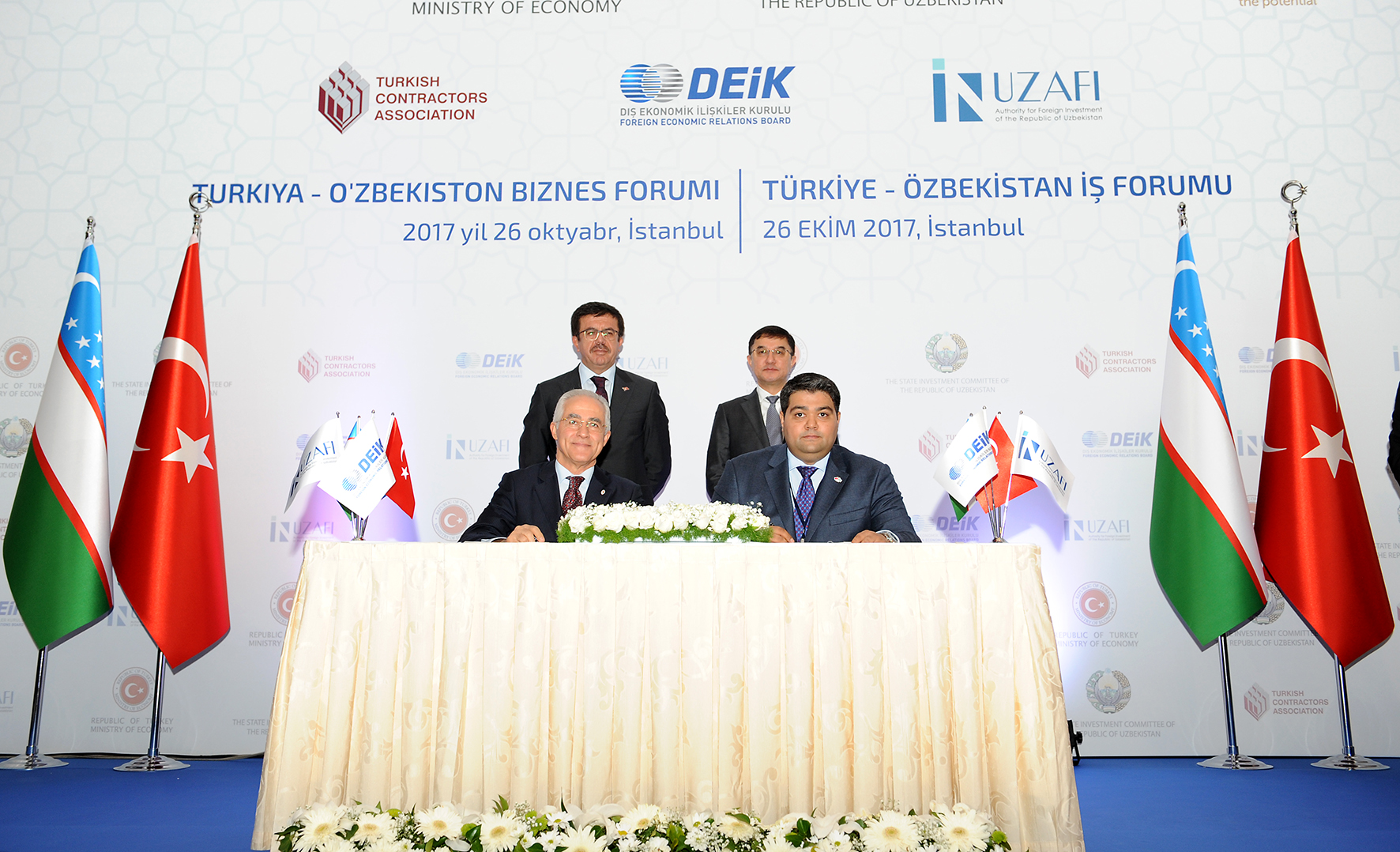