Turkey- Canada Business Council 14th Annual Joint Conference, hosted by DEİK, was held on October 10, 2017 in Istanbul with the participation of around 100 Canadian and Turkish businesspeople. Aspects of economic relations required to be developed was on the agenda within the scope of the conference in where potential cooperation opportunities within the sectors of mining, energy, advanced technologies and construction were discussed accordingly. 25 Canadian high-ranking private sector representatives attended the conference. The conference was held with further participations of DEİK President Nail Olpak, DEİK/Turkey-Canada Business Council President Osman Okyay, Ambassador of Canada to Turkey Chris Cooter, and Consul General of Canada in Istanbul Ulric Shannon, Deputy Mayor of Toronto Denzil Minnan-Wong, and Canada-Turkey Business Council Director Mike Ward.

Canadian Minister of Natural Resources Gordon Carrhas attended the conference with a video message and stated that almost one-third of the bilateral economic relations is consisting of activities related to the natural resources. Minister Carr further noted that Canadian investors conduct researches in Turkey market particularly in the areas of electricity, natural gas, infrastructure projects, solar power, biomass, wind and hydro-energy. Minister Carr said, "I would like to point out that we are ready for the accomplishment of a strong cooperation."

DEİK President Nail Olpakreminded that Canada is celebrating its 150th Anniversary and the bilateral business councils celebrate their 15th Anniversary this year. Olpak, remarking the current situation of the relations with the Canadian business circles within the framework of the sustainability, further said, "Long Term Comprehensive Economic and Trade Cooperation Agreement was just recently concluded with Canada and EU. Custom taxes shall be remitted by 98 percent and an increase of 11 billion Euros is expected to be realized in trade volume by virtue of this agreement. As you are aware, Turkey and EU were integrated with each other in terms of trade by the Customs Union that was accomplished in 1996 and European Union has become Turkey's number one trade partner. Turkey is not allowed to perform negotiations parallel to the above-cited agreement or Transatlantic Trade and Investment Partnership. Therefore, Turkey sustains damages from ‘major agreements'. We, as DEİK, at the present time where rules of world trade are dramatically changed, are required to progress based on the direct investment relations pursuant to the strong potential between Turkey and Canada and accordingly enhance and strengthen the bilateral relations. In this sense, we expect our Canadian friends to expedite the process. Businesspeople like us cannot do more except seizing minor opportunities and practicing upon them. We have now Canadian key players among us in here therefore we should make a very good use of it."

DEİK/Turkey-Canada Business Council Osman Okyay referred to incentive programs applied for the purpose of achieving the objectives within Turkish economy and the Medium Term Programme. Okyay pointed out that Turkish economy has demonstrated an average growth rate of 5.6 percent between the years of 2003 and 2016 and explained that the economic growth is expected to be 5.3 percent in the following period of 5 years. Business Council President Okyay emphasized that advanced cooperation can be accomplished in areas such as aeronautics, construction, mining, electric vehicles, information technologies in the event that the innovation and technological investments are to be continued expeditiously. He anticipated that the foreign investments worth of more than 100 billion USD realized shall further increase accordingly by virtue of general investment incentives implemented currently in Turkey, regional incentives and incentives for strategic investments. Okyay further stated that the defence industry within the cooperation to be established with Canada is one of the areas in where growth constitutes an opportunity with the trade volume of 60 billion USD. Okyay further noted, "Although Canada is one of our substantial trade and investment partner, unfortunately we were unable to accomplish the real potential between both countries. As the bilateral trade has been quadrupled since 1999, we should practice upon the synergy between the two countries and develop our relations accordingly. Turkey started to attract the attention of Canadian corporations by means of advantages offered recently and high economic growth."

Ambassador of Canada to TurkeyChris Cooter remarked that conceptions such as the state of emergency currently remaining on Turkey's agenda within the last few years, coup attempt and terror become determinants in terms of investors. Cooter, reminding that Canada is among the countries Turkish students prefer the most with respect to education, stated that Turkey represents a substantial potential for Canada. Cooter, emphasizing that Canada has an important agricultural mission in Turkey, further reminded that credit rating institutions such as Moody's and Fitch once more started to raise the Turkey's credit rating. Cooter, stating that the environment of uncertainty in terms of Turkey is required to be improved, further noted, "We can tend towards Central Asia together with the trade expertise of Turkey. Likewise, Turkey can cooperate with us for South America. We are capable of establish major cooperation in various areas such as shipbuilding, healthcare, agriculture and energy. There are no obstacles and impediments to tackle in the long term. Bilateral business opportunities are required to be sustained by means of more substantial endeavors."

Consul General of Canada in IstanbulUlric Shannon stated that messages for solidarity and unity towards Turkey are always expressed by Canada and through the Canadian perspective; the annual trade volume of 2.5 billion USD is quite low considering the potential of both countries. Shannon, highlighting that this situation constitutes a great opportunity for Canadians considering the developments experienced in Europe, USA and bilateral relations of Turkey, further emphasized, "We focus on certain sectors. We stay focused on areas such as agriculture, infrastructures, mining, healthcare and informatics to gain maximum benefits. A Canadian delegation on husbandry and animal genetics has arrived to Ankara 3 weeks ago. Furthermore, a promotional event was held with the participation of 18 Canadian university." Shannon, mentioning that cooperation with DEİK is their top priority, emphasized that the promotion of Turkey can be achieved by dialogues and therefore is required to be increased accordingly.

Canada-Turkey Business Council DirectorMike Ward remarked that a comprehensive Canadian delegation arriving to Turkey for the first time after a long time has participated within the researches of cooperation in areas such as mining, food, construction, energy and advanced technologies. Ward reminding of the substantial effect of the visit realized by DEİK to Canada in 2016 with a high profile delegation, further stated, "We should appeal to Canadians to experience Turkey's potential in almost all sectors such as pharmaceuticals, railways, energy, advanced technologies and construction. Performance of high profile reciprocal visits by both the Turkish Government and the Canadian Government as immediate as possible shall substantially increase the trade volume accordingly." 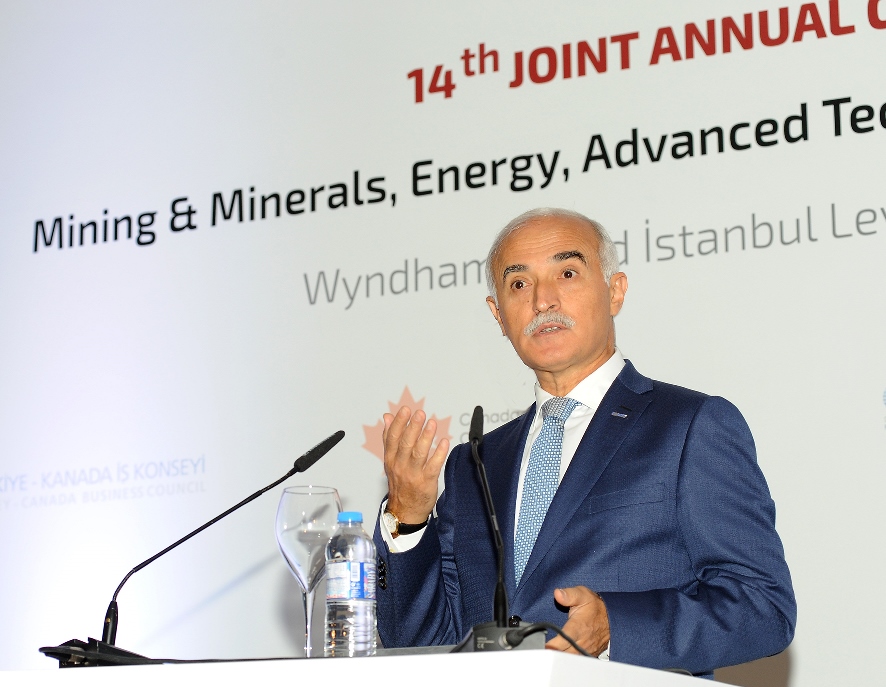