Third Term Meeting of Turkey-Tunisia Partnership Council was held on 19-21 July 2017 in Tunisia under the co-chairmanship of Republic of Turkey Minister of Economy Nihat Zeybekci. DEİK Vice President Mehmet Büyükekşi, DEİK Member of Board of Directors Rona Yırcalı, 15 Turkish private sector representatives operating in the sectors of energy, ship construction, tourism, logistics and construction, 17 Tunisian private sector representatives, bureaucrats and press members of both countries have participated in Tunisia-Turkey Round-Table Meeting that was organized within the scope of the event. Broadening the scope of the current Free Trade Agreement between the two countries was on the agenda of the Round-Table Meeting.

Mutual key issues and solution proposals for promoting trade and investment relations of both countries were discussed in the meeting. Also in meeting, agreements were reached on matters such as cooperation of Tunisia and Turkey with the third countries, negotiating the Agreement on Reciprocal Promotion and Protection of Investments and introducing export products of both countries to markets of both countries and third markets by means of collaborative endeavours.

Minister Zeybekci pointed out in his opening speech of the meeting that the exportation of Tunisia to Turkey is less than its importation and stated that planning should be done to increase the export volume of both countries. Zeybekci, emphasizing that Turkey has mobilized the entire required resources regarding the investments to be made in Tunisia, however the endeavours failed to yield favourable outcomes in Tunisia although substantial investments were made in other African countries, noted that good fellowship and political relations are significant as foreign trade volume for Turkey. Zeybekci further said, "We will spread efforts to boost Tunisia's exportation to Turkey in the forthcoming period. We are ready to do everything that is required to be done as Turkey. We are ready to make concessions to Tunisia that we have not made to any other countries across the world."

Zeybekci, pointing out the possibility of exportation of the products manufactured resulting from the investments of Turkish investors in Tunisia to the third countries, further stated, "to be able to achieve this, we are required to sign the Agreement on Reciprocal Promotion and Protection of Investments as immediate as possible. Nobody benefits from preclusions, prohibitions and restrictions. One side loses a bit while other side loses more; however liberality is a win-win situation. I articulate that the foreign trade deficit bothers us also as much as it does our Tunisian counterpart; however nature does not favour vacancy. The area vacated in absence of Turkish products shall be filled by other countries, not going to eliminate the trade deficit." Minister Zeybekci stated in the meeting in where olive oil, phosphate and fertilizer trade stood out that he expects the expansion of the Free Trade Agreement to be discussed. Zeybekci noted that Turkish contractors would involve within Tunisia's goals for the year 2025 including the infrastructure development by bringing in the financial facilities.

Tunisian Minister of Industry and Trade Zied Ladhari pointed out the importance of establishment of the legal infrastructure of relations of both countries. Ladhari, stating that the relation between the two countries is special and spectacular, further said, "Opinions of Tunisian Government is in the direction of maintaining and sustaining of our relations developed with Turkey in the aftermath of Tunisian Revolution." Ladhari, further mentioning that Tunisia is unbound within various areas particularly in trade and industry and they desire this initiative to be continued, said that "win-win" system would be operational for the favour of both countries through the agreements concluded within the scope of the talks. Ladhari, articulating that they managed to establish a sincere and open dialog with Minister Zeybekci, further remarked that obstacles to be encountered should not result in breakdowns of current bilateral relations. Ladhari further noted that he is looking forward to welcoming Turkish investors in his country.

Turkish Exporters Assembly (TİM) and DEİK Vice-President Mehmet Büyükekşi stated in his opening speech that development of political and economic relations with African continent has a significant place within Turkey's international strategy. Büyükekşi, emphasizing that the ties between business circles of both countries will be strengthened by means of Turkey-Africa Business Councils operating within DEİK's body, remarked that there are extensive cooperation opportunities for Tunisia and Turkey both in industry, tourism and in reciprocal investments. Büyükekşi further said, "Our goal is to raise the bar for our reciprocal trade and to achieve Tunisia's goals for the year 2020 and our country's goals for the year 2023 by means of strengthening our connections." Büyükekşi, stating that Tunisia, in terms of its location within the region, is an ideal base for Turkish enterprises desiring to expand to Africa, further said that the opportunity to expand to Africa could be seized by realizing mutual investments especially in the sectors of energy, fertilizer, food industry, mining, textile, leatherworks and footwear, electric electronics and automotive (mechanical parts and sub-industry).

Upon the negotiations, Cooperation Agreements were concluded between the two countries for development of relations in the areas such as energy, industry and trade. 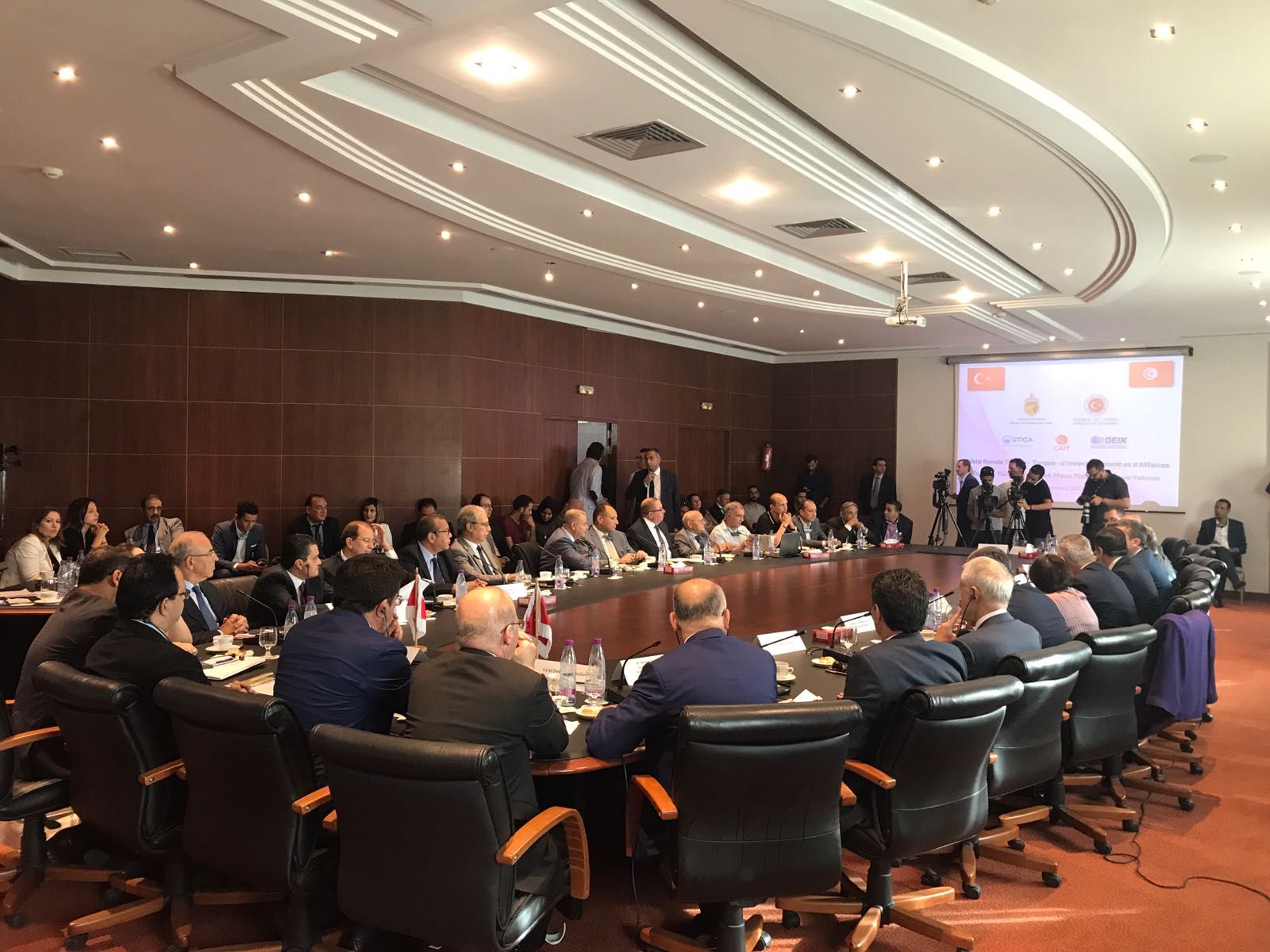