Around 700 Turkish and Serbian business world representatives have attended the Business Forum that was organized within the frame of official visits of the President Recep Tayyip Erdoğan of the Republic of Turkey done to Serbia on October 10, 2017.

President Recep Tayyip Erdoğan of the Republic of Turkey stated that Serbia is the key country of stability and uniformity in the Balkans. President Erdoğan, emphasizing that the volition and will with respect to development and improvement of the relations between Serbia and Turkey in every aspect do exist, further stated, "This visit is the clear evidence of the importance I place on our relations. Currently, there are around 700 businesspeople attending the Business Forum. This situation is a clear expression of our intention and desire to carry forward our relations even further. " President Erdoğan, noting that Turkey has achieved a growth rate of 7% between the years of 2011 and 2015 and 5% for the first half of year 2017, further noted that 'Build-Operate-Transfer' model has paved the road for the private sector. President Erdoğan, highlighting that Turkey desires to integrate with the Balkans, stated that endeavours and efforts based on ‘win-win' principle shall be sustained and the experiences and fund of knowledge shall be shared accordingly.

President Erdoğan, remarking the substantial economic reforms performed by Serbia, further stated, "This interest shall transformed into solid and sound earnings and achievements within a short span of time by virtue of quality workforce and facilitations and conveniences provided. We have established the legal infrastructure and framework for the purpose of developing and improving the reciprocal economic relations. We are yet experiencing the steady increase in bilateral trade volume. The trade volume can reach up to 1,2 billion USD by the end of year 2017. Let's increase this trade volume to 3 billion USD." President Erdoğan, highlighting that the governments of both countries would do their full share of works, expressed that the representatives of the business world would tend towards investments. President Erdoğan, emphasizing that Halk Bank has substantial contributions in terms of economic relations and providing services in Serbia through 30 branches, stated that supports and assistances provided by the Serbian Government are required to be sustained accordingly. President Erdoğan, referring to the infrastructure, tourism and service sectors, stated that the economic and trade relations shall demonstrate an increase and improvement parallel to the improvements and developments experienced by the mutual history and cultural ties.

President of SerbiaAleksandar Vučić stated that Serbia and Turkey would find an investment opportunity in the third countries. Vučić said, "Whoever provides you better terms in the Balkan region, come to us and we will provide you better terms." Vučić, expressing that Serbia intends and therefore strives for attracting more investors, further noted, "For the first time, Serbia does not have any deficit in its budget. We are constantly reducing public debts. Unemployment rate had dropped down to 11.8 percent. We managed to prosper our welfare level by virtue of Turkish business world representatives. Turkish people devote themselves while working or doing business."

Republic of Turkey Minister of Economy Nihat Zeybekci remarked that "Turkey-Bosnia-Herzegovina-Serbia" trilateral mechanism is functioning perfectly and that this political atmosphere and friendship relation are required to be sustained accordingly. Zeybekci further noted, "We managed to bring the Free Trade Agreement to a position closer to where it should be as a consequence conducing to longitudinal endeavours. Our target for the end of year 2020 is to achieve a trade volume figure of 3 billion USD." Minister Zeybekci, emphasizing that there are on-going endeavours and efforts for updating the Free Trade Agreement within the areas of public procurements and electronic trading, further expressed that Free Trade Agreement was concluded with Bosnia-Herzegovina and thus an agreement having the qualification of a bridge among the three countries shall be put into use accordingly, further said, "Our relations between Turkey and Serbia shall proceed incrementally. Our job is to ensure the legal assurance, the rest remains with you, the business world representatives. We will be organizing the ‘Turkey- Bosnia-Herzegovina-Serbia" Trilateral Committee Meeting and business forum in Belgrade in the early December."

Deputy Prime Minister of Serbia and Minister of Trade, Tourism and CommunicationsRasim Ljajić said that the relations between both countries are at their best stage. Ljajić, stating that Turkey and Serbia have already reached to the level of strategic partnership, further noted that the defining milestone of the relations is the arrival of Halkbank to Serbia and the Business Forum held today. Ljajić, remarking the broad participation to the Business Forum, highlighted that the business opportunities are required to be practiced upon and turned to account and further noted that they would take care of Turkish business world representatives and provide them with the required support and more as long as they remain in Serbia.

TİM (Turkish Exporters' Assembly) Chairman and DEİK Vice PresidentMehmet Büyükekşi said, "As businesspeople, we would like to improve the relations between two friendly nations to further levels." Büyükekşi, reminding that the Agriculture Business Forum was organized in Serbia two months ago, further stated, "Our businesspeople are involved in a broad spectrum here from textile to construction and from tourism to informatics. Our corporations have realized bilateral business talks and meetings prior to the forum. Foundations of new partnerships and initiations have been laid." Büyükekşi, reminding that Bosnia-Herzegovina-Serbia Trade Office was established in Istanbul through the efforts and endeavours of the Minister of Economy Nihat Zeybekci, further stated, "Trade Office has been intensively endeavouring since 2016 for the purpose of increasing the bilateral trade. We believe that the major achievement of the committee meetings would be the Trilateral Free Trade Agreement." Büyükekşi, stating that the exportation of Turkey to Serbia has experienced an increase of 22 percent within the last 10 years, further noted that the export figures achieved a level of 582 million USD in the year 2016; however, it is not yet on the desired levels and therefore the objective is to carry the bilateral trade to upper levels accordingly.

Serbia Chamber of Industry and Commerce ChairmanMarko Čadež,emphasizing the importance of conclusion of the expanded Free Trade Agreement, reminded the supports and assistances provided by both countries for overcoming the entire obstacles and hindrances. Čadež further stated, "From now on, have a confidence in the business worlds of both countries." 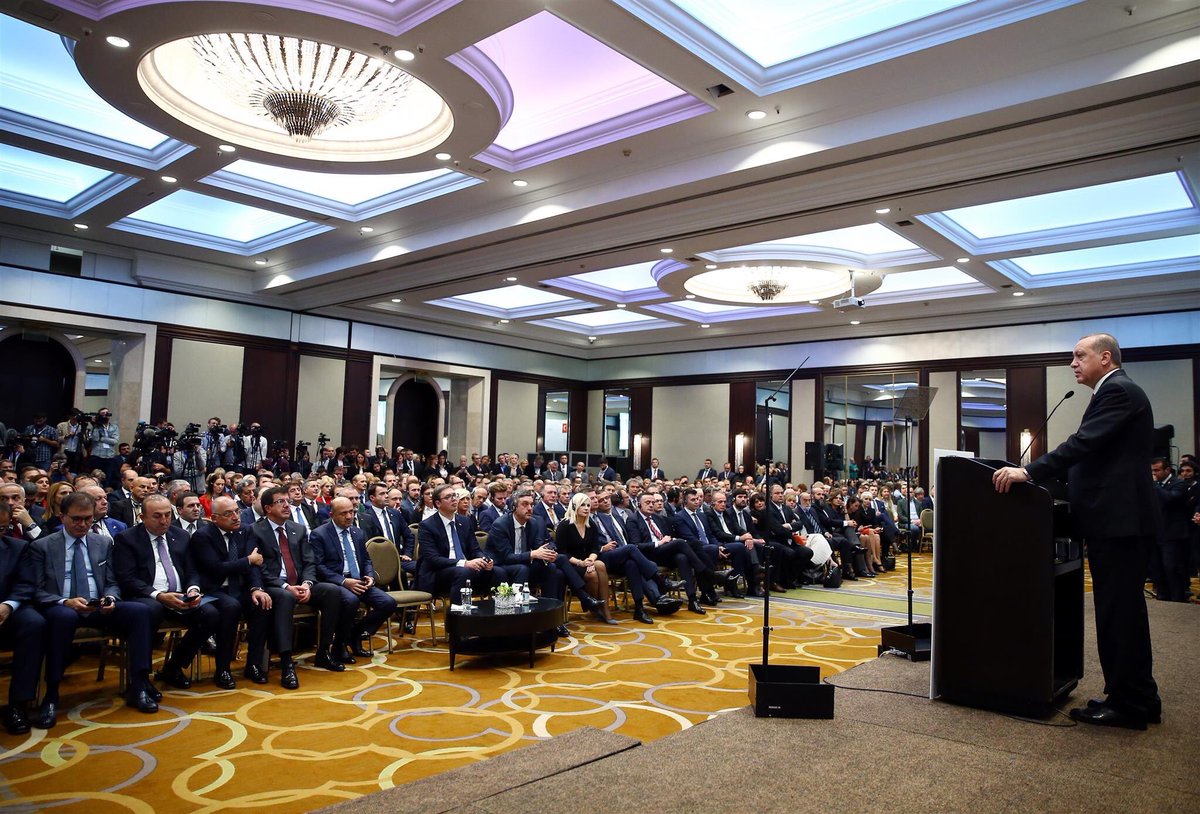 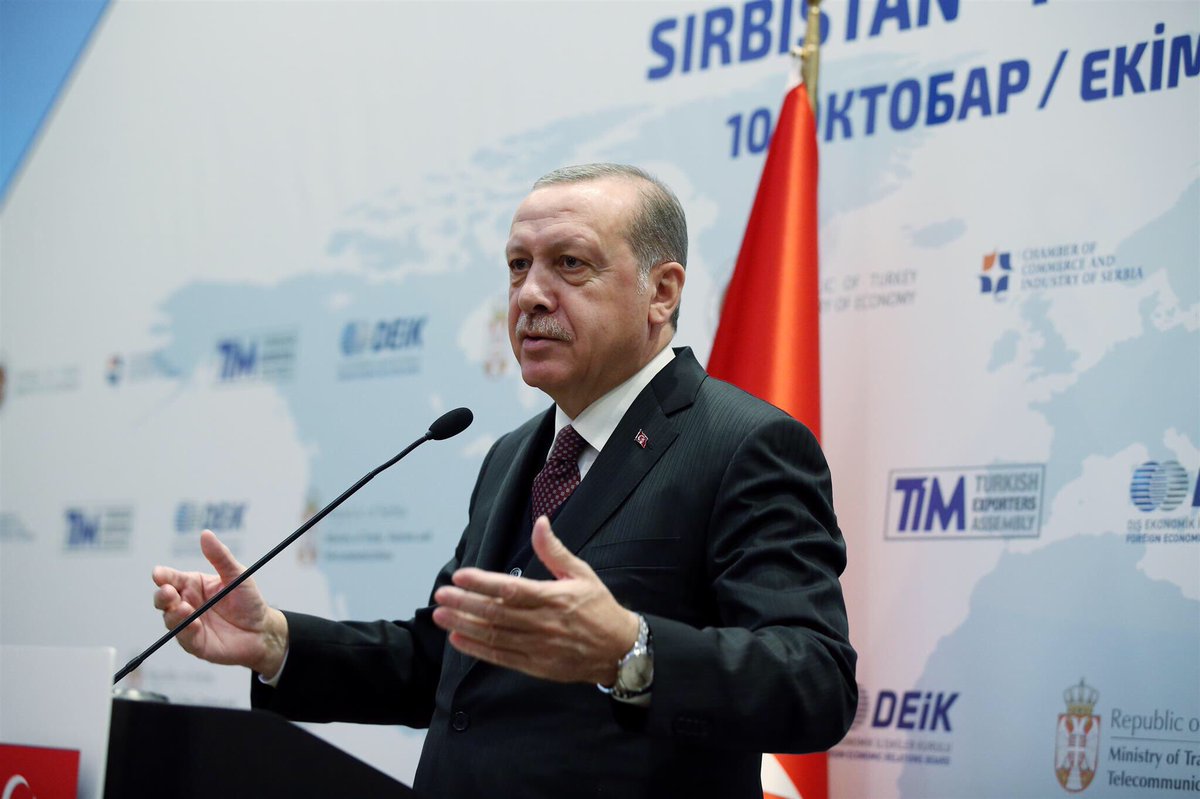 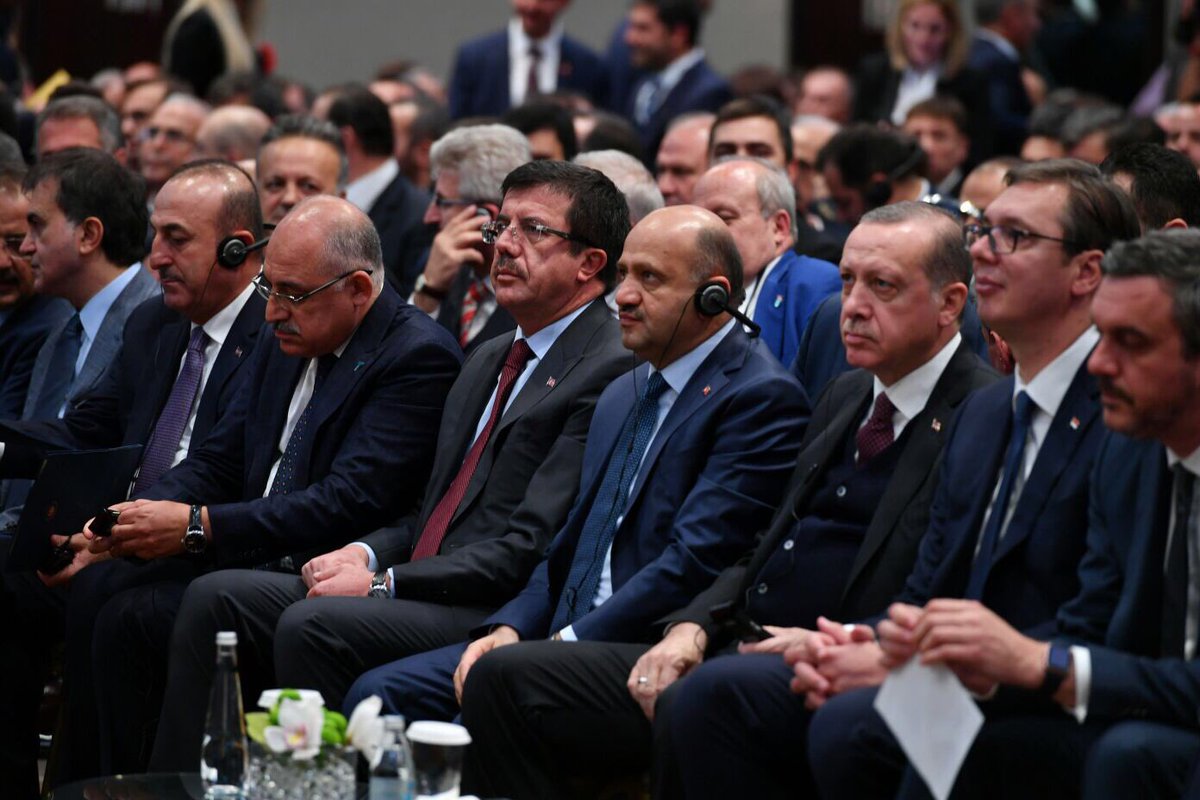 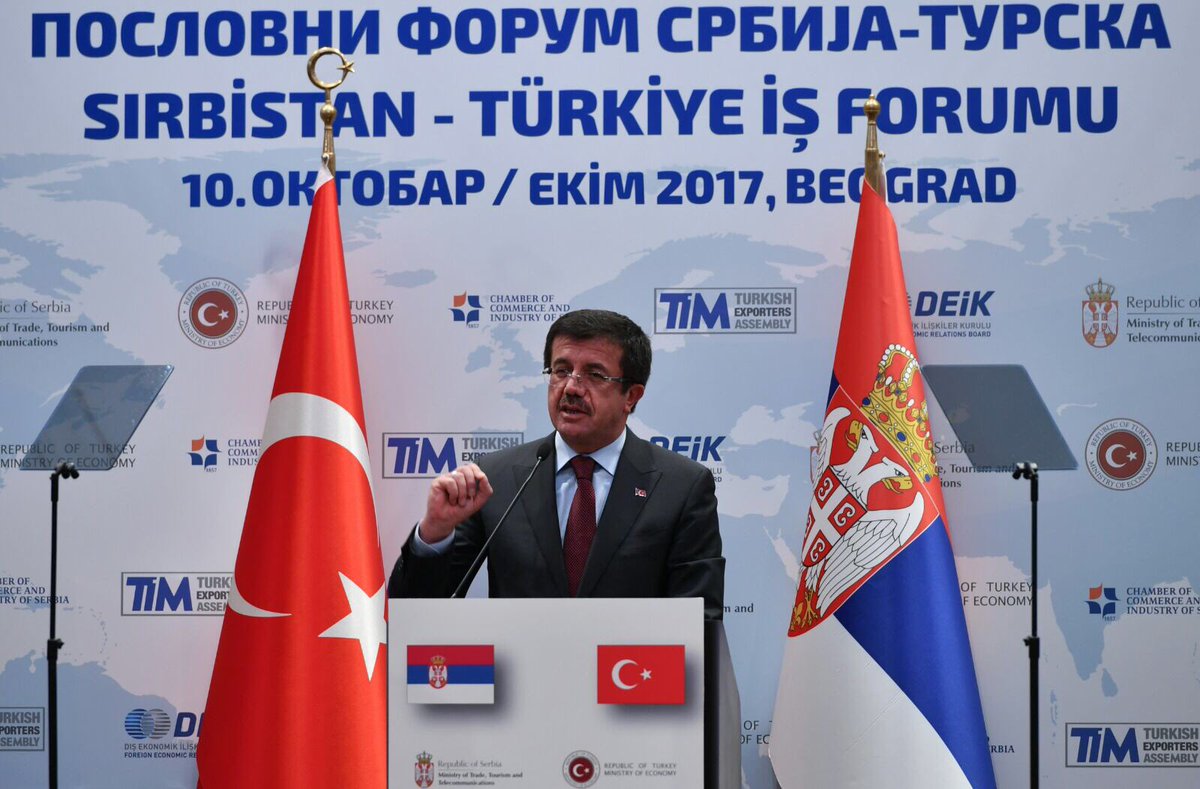 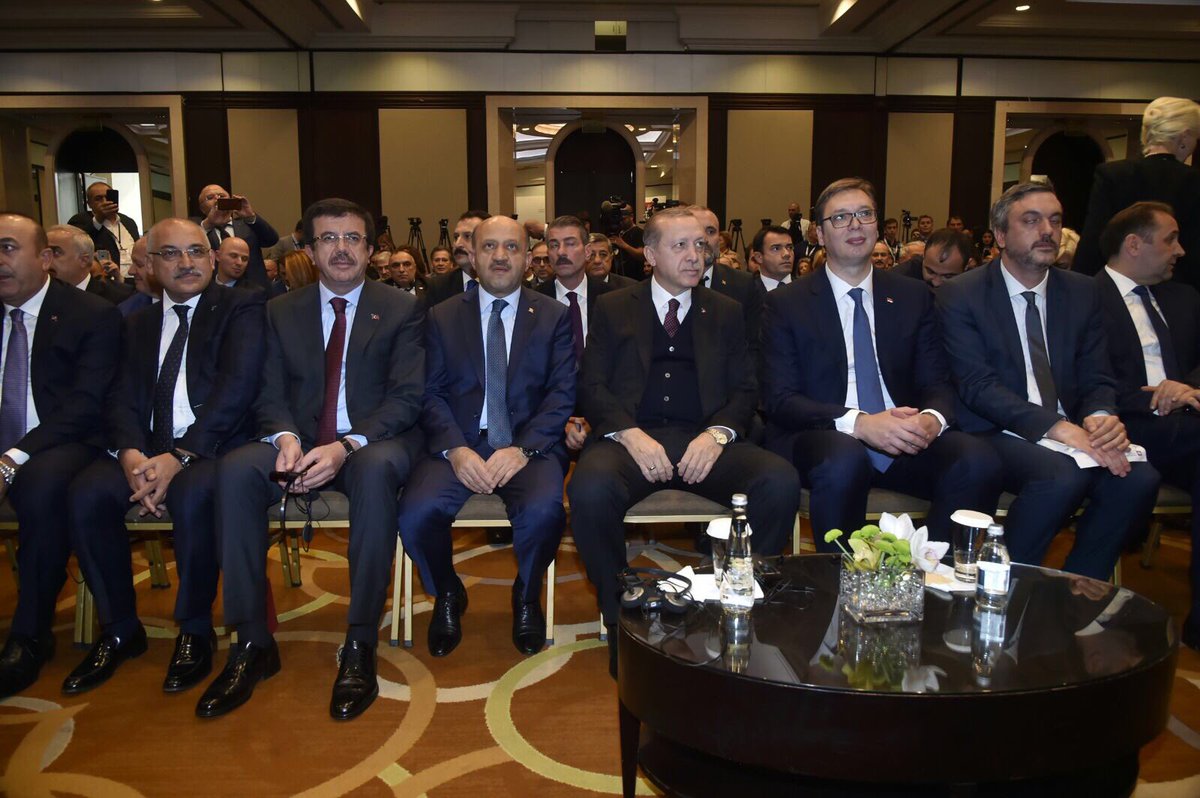