PRESIDENT ERDOĞAN: "WE EXPECT OUR BILATERAL TRADE VOLUME WITH THE US TO REACH $25 BILLION BY THE END OF THE YEAR"

At the Gala Dinner, which was attended by prominent representatives of the Turkish and American business communities, the importance of bilateral trade and economic relations was emphasized and a call for cooperation was issued. The Turkish Investment Conference Gala Dinner, which was held for the 11th time this year, hosted nearly 300 guests, including the leaders of the Turkish business community, the world's top investment companies and fund managers, and senior executives from the United States.

Speaking at the 11th Turkey Investment Conference Gala Dinner, T.C. President Recep Tayyip Erdoğan recalled that in May 2021, he exchanged views with the executives of some American companies via video conference and discussed new cooperation and investment opportunities, and that this time DEİK/Turkey-USA Business Council met with valuable representatives of the American business community. stated that this provides the opportunity. Recalling that Turkey and the U.S. have been two strong strategic partners and allies for 70 years, Erdoğan said, "This very special and sound cooperation has contributed to peace, stability and security in many regions of the world over the years. It has shown once again how important and valuable a partnership is. As in personal relationships, disagreements may arise from time to time in intergovernmental relations. We believe that these can be overcome through dialog in a framework of solidarity and mutual respect, and in the comprehensive meeting we confirmed our common will on this issue. We fully agree with Mr. President that it is possible and necessary to expand our economic relations. We jointly underlined our determination to increase our bilateral trade volume to $100 billion. This figure is a comfort if the right steps are taken. We agree that this is a realistic goal that can be achieved.

Despite epidemic conditions, bilateral trade volume between Turkey and the U.S. increased to $21 billion last year. The U.S. ranks third among the countries to which Turkey exports the most. We expect our bilateral trade volume to reach $25 billion by the end of this year. Our country has shown during the epidemic that it is a reliable link in global supply chains. We are continuing the work we began with the goal of leading our country to a more civil, democratic, and free constitution. We will continue to implement the necessary legislation to ensure that international investors can safely invest in our country. Our flexible and high production capacities offer many opportunities to American companies, especially in terms of supply chains and security of supply.".

Mehmet Muş: "We want to further strengthen our trade and investment relations with our strategic partners like the U.S."

Noting that Turkey has achieved serious economic breakthroughs in the recent past without being overshadowed by global and regional problems, Minister of Trade Mehmet Muş said: "The Turkish economy, which has been tested by both political and economic tensions over the past 20 years, has successfully overcome all difficulties. It has a vision to complete its digital transformation, have the most advanced production technology and consolidate its position as a manufacturing and trade hub with high competitiveness and strong logistical and legal infrastructure. "We want to further strengthen our trade and investment relations with our strategic partners such as the US on a global scale. We are convinced that in the coming period, together with the U.S., we will find new solutions at all levels, both in many issues affecting our bilateral trade and in the development of the multilateral trading system," he said.

Nail Olpak: "The way to increase bilateral trade volume is through our state-centric approach"

Nail Olpak, President of Foreign Economic Relations Board (DEİK), said, "We are approaching our U.S. action plan with a multifaceted and dynamic perspective. We will be more supportive of our business community with a state-centric approach.Currently, our DEİK/Turkey/USA Business Council has committee structures in 7 states, and we aim to increase this number to 13 by the end of the year. We believe that the way to increase bilateral trade volume between Turkey and the U.S. is through our state-centric approach.

Olpak stressed the need for cooperation on social issues and the goal of strengthening economic and trade ties, recalling the words of Amelia Earhart, the first female pilot to cross the Atlantic Ocean by plane, "Anyone who has the heart to do something has the oceans to fly," and said, "Success in the heart. As trusted representatives of the Turkish and American business communities, we have more oceans to cross, but we have strong hearts to overcome them to serve our common interests by strengthening our cooperation in both social and economic issues."

Yalçındağ: "The experience of the Turkish entrepreneur is clear, his courage is clear, his success is obvious... We want our American friends to be partners in this success."

DEİK/Turkey - USA Business Council (TAIK) Chairman Mehmet Ali Yalçındağ expressed his pleasure that the Turkey Investment Conference Gala Dinner, which could not be organized in the last two years due to the Covid-19 epidemic measures, could be realized this year with the participation of President Recep Tayyip Erdoğan. Yalçındağ pointed out that TAIK has never abandoned its priorities despite the change in habits due to the global epidemic, "We have tried to open new opportunities by asking ourselves how we can contribute more to the economic and commercial relations between the two countries. We have made it our mission to contribute to the areas that are waiting to mature between Turkey and the United States.

Yalçındağ pointed out that the volume of trade between the two countries does not meet its potential despite the obvious annual increase, "As TAİK, we are acting proactively and implementing success-oriented projects so that trade and investment between our countries reach the level they deserve. We are paving the way," he said. Referring to investments in defense industry and technology, Yalçındağ said, "The experience of the Turkish entrepreneur is clear, his courage is clear, his success is obvious... We want our American friends to share in this success as well. Let us experience together the justifiable pride of greater success." 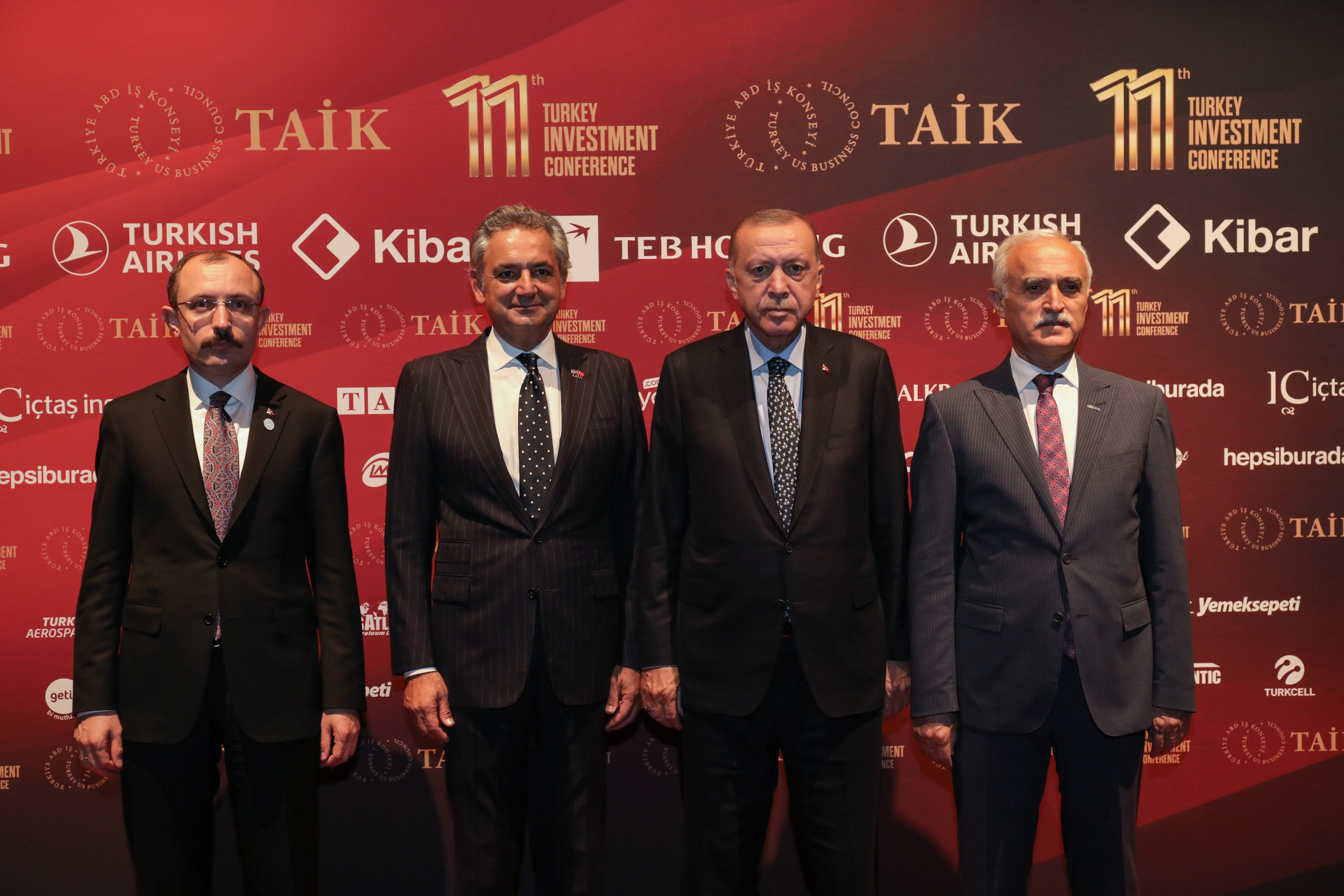 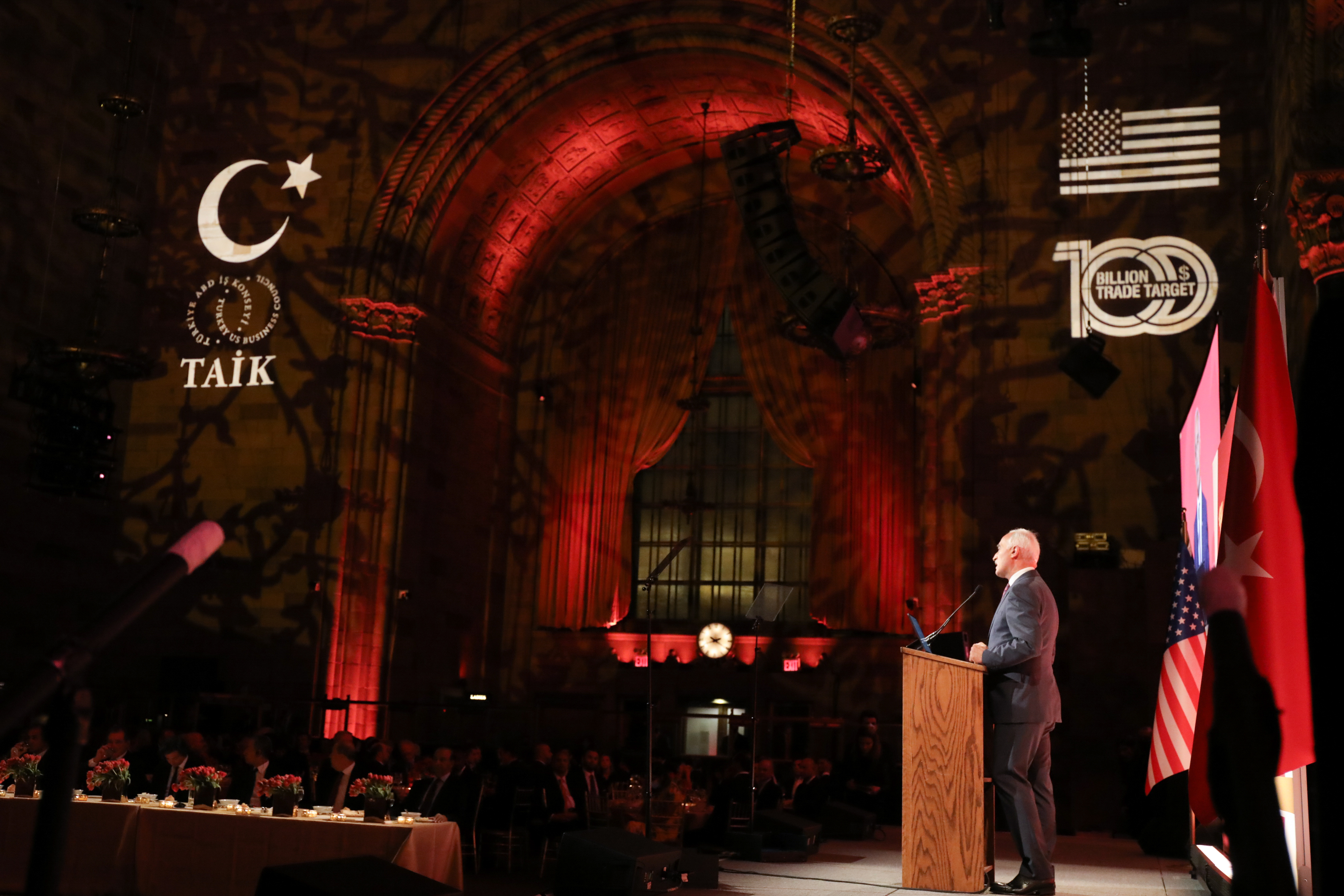 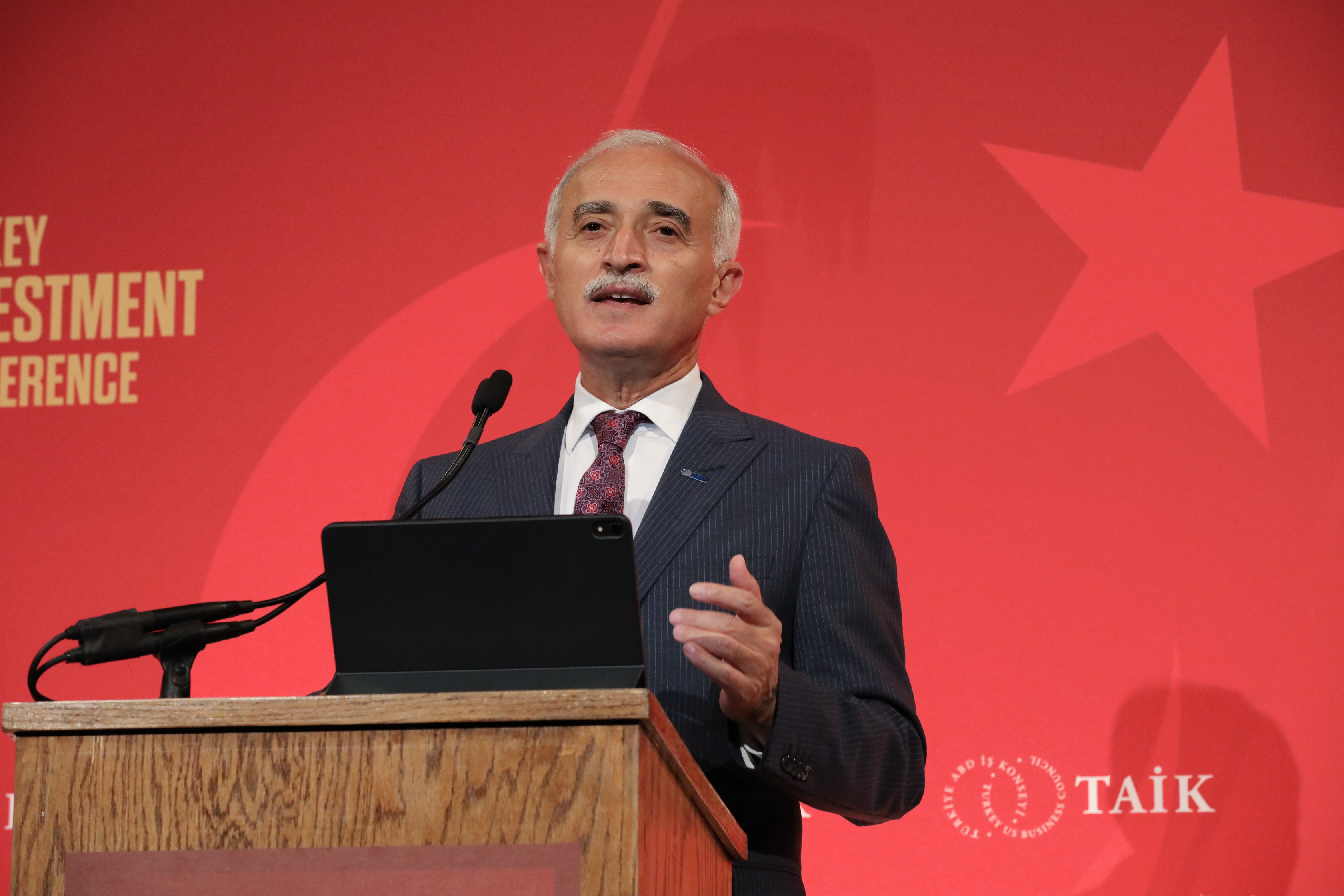 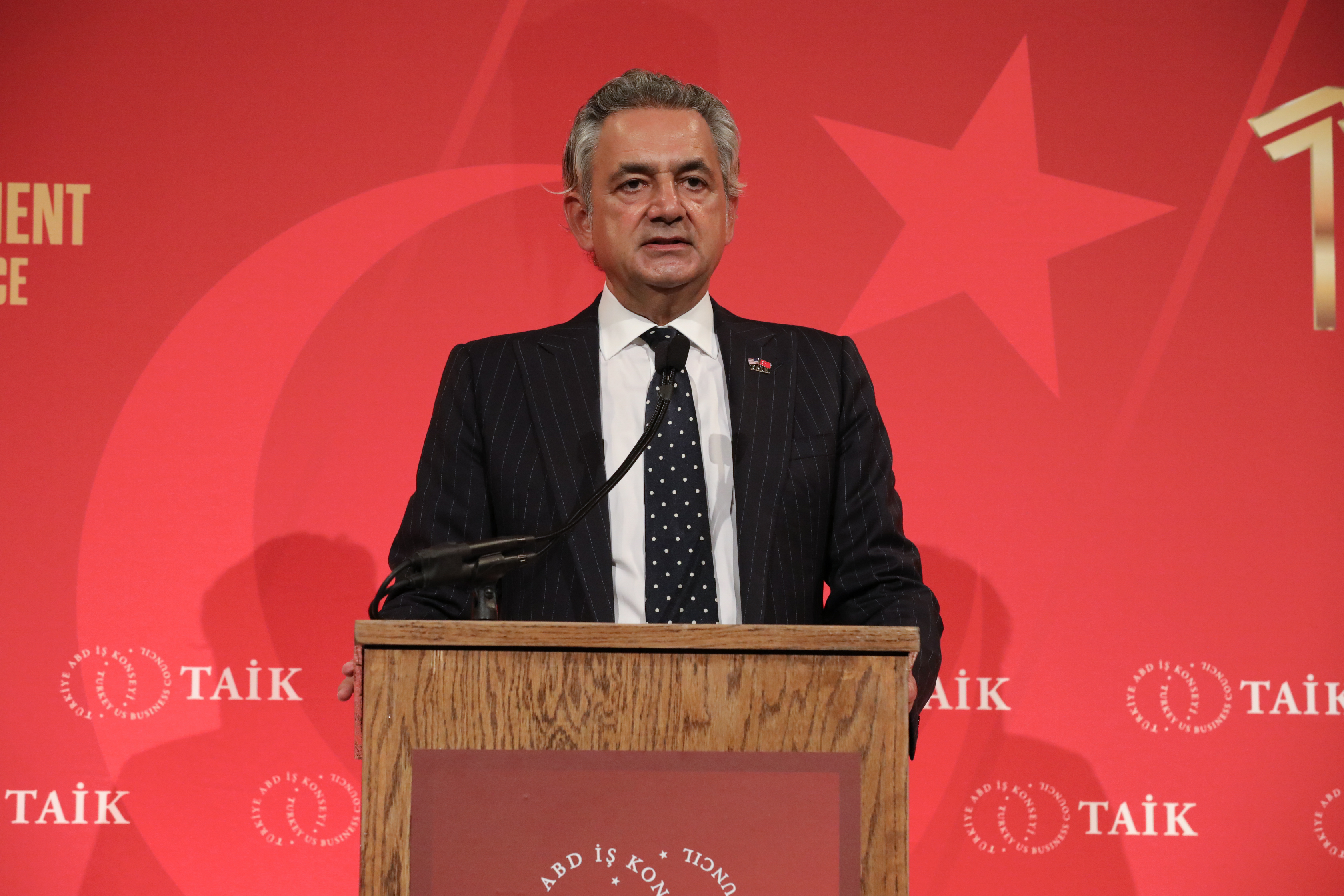 NAİL OLPAK: “TURKEY WILL CONTINUE TO GROW WITH THE CONFIDENCE THAT STEMS FROM DEMOCRACY AND THE STRENGTH IT RECEIVES FROM THE WILL OF THE NATION”
OLPAK: “THE GROUND FOR DIALOGUE AT THE NATO SUMMIT PLEASED THE BUSINESS WORLD”
OLPAK: "WE INVITE THE WHOLE WORLD TO BECOME ONE VOICE FOR MASJID AL-AQSA"
OLPAK: "U.S. PRESIDENT BIDEN'S POLITICAL AND BASELESS STATEMENTS ARE NEVER ACCEPTABLE"
PRESS RELEASE
WE ARE MUCH STRONGER WITH OUR 96 FOUNDING INSTITUTIONS AND MEMBERS