Turkish and Italian Roundtable Meeting, organized in cooperation with DEİK/Turkey-Italy Business Council and Confindustria, was held on November 2, 2017 in Rome with the participations of the Minister of Economy Nihat Zeybekci, Italy Economic Development Minister Carlo Calenda, Republic of Turkey Ambassador to Rome Murat Salim Esenki, DEİK Chairman Nail Olpak, DEİK/Turkey-Italy Business Council President Burak Vardan and Confindustria Deputy Chairman Alberto Baban. The leading representatives of infrastructure, health, energy and finance sector of both countries convened in the meeting that was held within the scope of official visit of the Minister of Economy Nihat Zeybekci to Rome.

Minister of Economy Nihat Zeybekci stated that 2017 was a successful year for business circles of the two countries and accordingly an increase of 10 percent was achieved in the bilateral trade. Zeybekci, emphasizing that a trade volume of 20 billion USD shall be accomplished between the two countries, further mentioned that 70-80 percent of Turkey's general exports was realized with SMEs and sector-related cooperation between Turkey and Italy is required to be increased. Minister Zeybekci also noted that the frequency of the meetings should also be increased within this scope by means of DEİK and Confindustria.

Zeybekci, reminding that world's leading finance institutions has revised Turkey's growth figure 3 times in the year 2017, further noted, "Currently we have a growth rate of 5.1%. We are planning to be in the leading position in OECD with a growth rate of 6-6.5% by the end of the year. Despite the adverse conditions of our geography, we are demonstrating an economic performance challenging and pushing the entire conditions and limits. We will be reconditioning and revamping our entire healthcare system within the following 10 years." Zeybekci, emphasizing that the opportunities in the third countries can also be assessed and practiced upon under the coalescence of Turkish and Italian enterprises, pointed out the enterprise-based incentive system. Zeybekci, stating that the trade volume of Turkey with Europe is 170 billion USD, further mentioned that 49% of Turkey's exports and 41% of its imports were realized with Europe and Turkey alone is Europe's 4th biggest trade partner. Minister Zeybekci, reminding that the scope of Customs Union is quite narrow, further stated that agriculture; food, services, public procurements and electronic trade shall be included by means of updating the scope. Zeybekci, stating that Turkey alone increases the trade volume of Europe as suggested by a research conducted, further noted, "Our economic relations with Italy shall be advanced to further levels without the requirement of any update. Things we can do as governments are quite limited; however situation with the business circles is different. We are aiming to convene again in 2018 within the scope of JETCO."

Italian Minister of Economic Development Carlo E Calenda, stating that they will be supporting Turkey with regards to updating the Customs Union, further said, "I have never spared my support regarding the Turkey's membership to EU. It is very significant to update this agreement with Turkey; Turkey cannot be excluded from Customs Union." Calenda, emphasizing that the bilateral relations between the two countries have always been favourable, concrete and strong, further noted, "We, as Italian enterprises, are able to participate in the tenders in Turkey. Why wouldn't it be the same for the Turkish enterprises? Turkey is a very substantial partner for us. This endeavour is something that we are required to do for ourselves." Calenda, mentioning that he favours for an establishment of a business council between DEİK and Confindustria, also stated that concurrent meetings are required to be organized within the scope of the trade fairs, grounds for bilateral business meetings should be created and Eximbanks of both countries should perform endeavours with this regard. Calenda, expressing that there are major opportunities for winning tenders within the third countries, further noted, "How can we be of an help for the enterprises that are to operate in the third countries for the very first time? A significant schedule awaits us with respect to the third countries. Let's determine two or three projects and go to Africa to see how these projects can be accomplished. Turkey is a substantial partner for us not only in terms of business opportunities but also for internationalization. I believe that this endeavour must be assigned to a group and a support endeavour must be performed for JETCO. I would like to do that in Italy in the beginning of next year. Should the need arise; we are also open and available to provide any financial support. Our relations are well developed enough for us to create new projects and give precedence to new idea."

DEİK President Nail Olpak emphasized the diversity of the common heritage between the two countries and reminded that Turkey currently hosts more than 35 thousands of Turkish people. Olpak, stating that the economic and trade relations are in harmony and synchronization, further expressed that the bilateral trade currently experiences a downward trend and therefore is required to be increased hastily. Olpak, addressed to the importance of Italy's determination of Turkey as ‘Target Country' for the years of 2017 and 2018 and said, "our bilateral trade is required to be increased by us the representatives of the business world of the two countries that have many things in common. In this context, we attach importance to Italy's determination of Turkey as ‘Target Country' for the years of 2017 and 2018." DEİK President Olpak, underlining that the cooperation should not be remained limited with the two countries and Europe, further noted, "We, as the representatives of the business circles of two countries sharing a common historical background, are required to do joint business in third countries. As you are aware, Turkey now is an important country of transit for investments. Many countries manage-direct their investments and operations in Africa, the Middle East and Central Asia through Turkey and form partnerships and associations with Turkey. Because we, as the Turkish business world, are in possession of considerable amount of knowledge and experiences on these geographies. We do know well the answers of the questions such as ‘whom to do business with and how? Which investments and sectors are profitable?' We procure industrial goods within these regions; we transport those goods with Turkish trailer trucks. I am quite confident that Turkish and Italian businesspeople can perform way too bigger businesses than the current ones by means of joint projects." Olpak, reminding that the Turkish business circles have been waiting for the initiation of the negotiations related with the revision of the Customs Union, further said, "We solicit for permanent solutions to be found for chronic nuisances as immediate as possible such as transportation quotas, driver visas, unfair and unjust visa practices towards Turkish citizens."

DEİK/Turkey-Italy Business Council President Burak Vardan stated that there are cooperation opportunities for Turkey and Italy within the third countries. Vardan also emphasized the significance of Eximbank-Sace Coinsuring Agreement. Vardan, pointing out the significance of the establishment of the cooperation between SMEs on the basis of sectors, further noted that he will be organizing a trip to Bologna at the end of November for the purpose of development of business partnerships among the SMEs operating within the hospital and infrastructure sectors for the medical devices in cooperation with the Business Council with ICE. Vardan also pointed out that an organization of a delegation visit is planned to be performed in January 2018 for the renewable energy sector.

Balance of Trade: 2.6 billion USD in favour of Italy 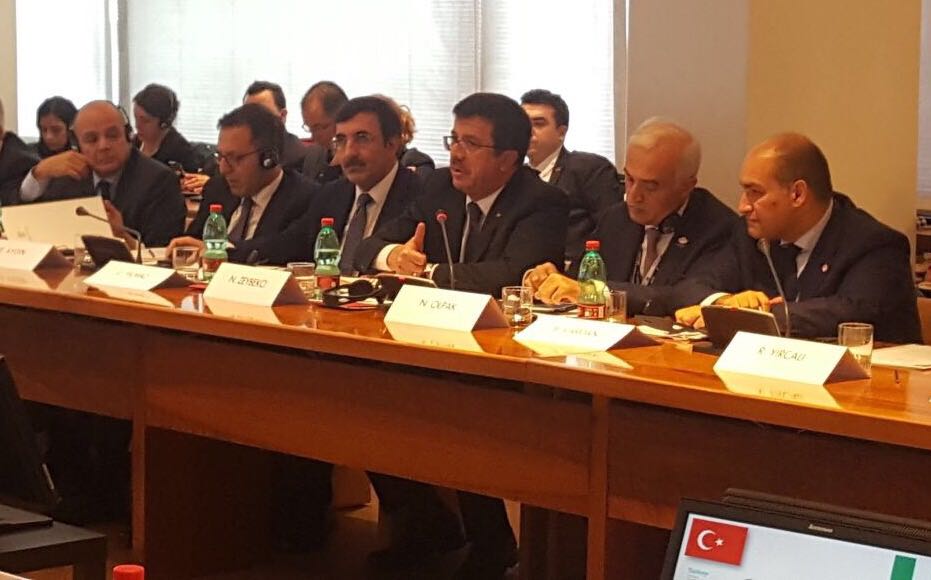 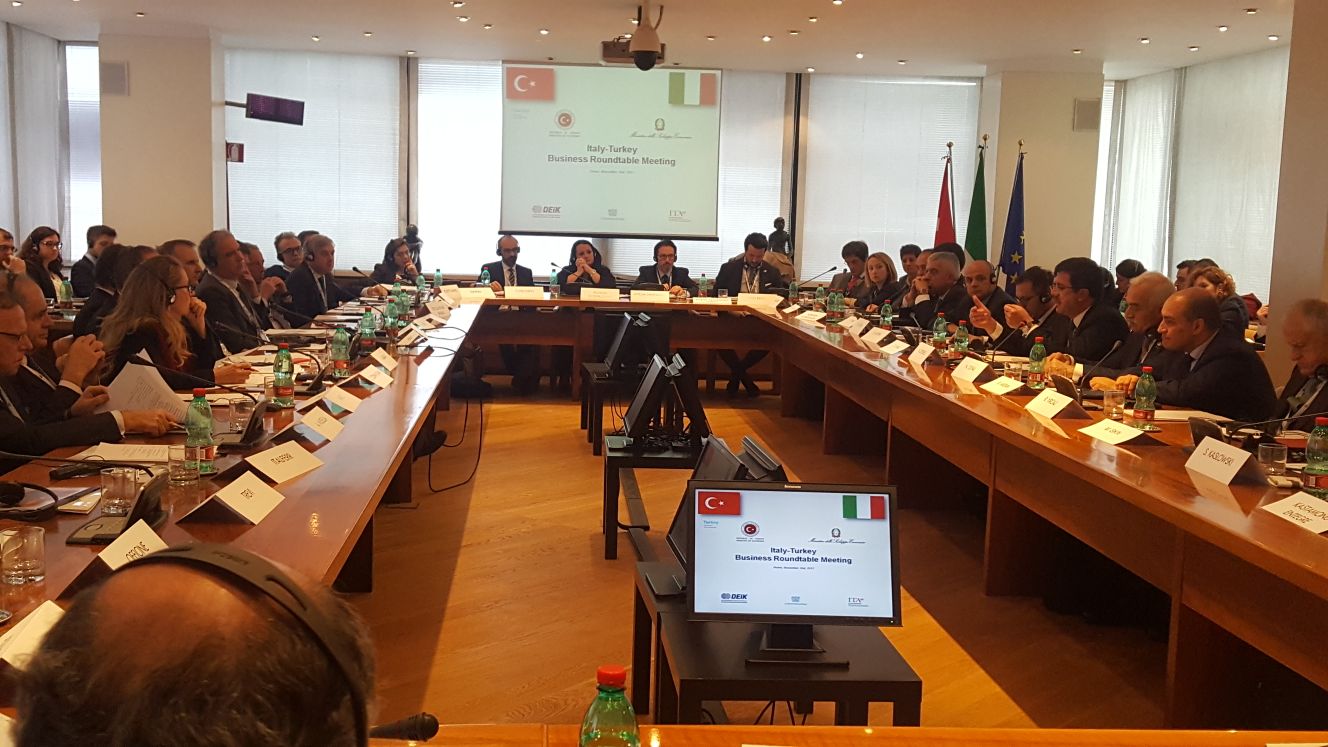